A downloadable game for Windows

NB: this game has a racial slur in it. It's a quote from a rap song and was meant as a joke (which is actually not that funny). I lost the files of the games long ago so I can't edit it out. Sorry about that.

The game crashes every time I finish the final customization. No error message either.

That's on purpose, sorry. The game was meant as some kind of prank. I probably would do it differently today.

I understand why now, thanks for informing me! I still like the game!

Glad to read that :)

Ngl the break ya neck nigga wqas funny to me lmao

i couldn't get past the customisation. i would've had a lot of fun if not for a particular slur on a helmet :(

Hi, this is a game I made a long time ago and english is not my native language. I suppose you're talking about the "break your neck" joke. It was a reference to the Busta Rhymes song, but I see now how it can be innapropriate. Sorry about that

That's okay, I'm aware of how the line between humour today and back then is pretty vague, and as content creators and people we live and learn. I'll be sure to give your game another go :)

Thank you and sorry about the racist slur, english isn't my first language and it's not always easy to know what is appropriate or not.

I like your sense of humour. There could well be a fully fleshed game in the 'trying to deal with real world problems like in an RPG' concept.

I don't know that this game is still supported, but would you/someone be willing to offer some suggestions to get it running? I've tried every combination of driver & filter, but keep receiving an error screen. I suspect that this may have to do with my monitor having an unusual aspect ratio (5:4), but I'm not sure how to address the problem.

I find the ending interesting, but maybe not so well executed. My impression is that Breaking Character is a very short and pretty simulator with trollish humor.

I'l glad the summary says it's about character creation and hints that that may be all. But it also describes it as a game. Not as a 100% linear kinetic novella. Which means there's supposed to be, y'know, at least one variable variable involved in the code, beyond the static clickable sprites and few lines of text.

My main complain is that closing the windows is confusing and makes no narrative sense:

Returning to the title screen would have been more artsy and less jarring.  Even better and still simple, witting a last line of dialogue from the second character hinting at passing of time before returning to the title screen if the player stays, and only closing the window itself if the player leave would have brought a clever and deep message left to be interpreted openly though roleplay.  Otherwise, even the theme of roleplay has yet to be found in this seemingly interactive novel.

This game was really cool !! Interesting concept & I too like the character creation best in games lmao

That must crash at last step?

I had a good laugh with this game! Kind of wished it had a different ending, but overall it was still really funny.

Disappointing that the game seems to end in a crash no matter what. None of the choices matter. It's a fine way to end the game, but it's not clever. I think you should finish it.

This game is really cute. The commentary is clever and the underlying story is equal parts sweet and heartbreaking. Thanks for the game!

I cant get past the NEVER leave or comeback part.

How do I actually play it?

A rather fascinating game. Kinda wish there was more to it, but I enjoyed it!

You could have at least had a message at the ending or something. The game just closing made me kind of irritated. Prior to that it was fun, like a genre or game making fun of itself. Just wish there was more to it. Meh.

this game is hillarieouse!!! Even if it was a joke ,its a pretty damn good joke

This game fucking sucks, infact THERE IS NO GAME! ALL I'M DOING IS WASTING MY PUTTING TOGETHER A CHARACTER JUST FOR IT TO END! Fuck this game, it gets 5 shits for being the worst game ever made since it literally DOESN'T HAVE A GAME TO PLAY! Lazy fucking piece of shit...

if game isn't finished.. ok, i would wait until you finish it.. but if this game is finished it isn't worth even 1$ because i spent a 15 minutes choosing things to let game turn off without any message or something...

its a free game stop complaining you shit

Man this game seems intresting! Please release it for mac so I could play it :)

I saw gloom play this and fell in love! I wish it was for Mac too :(

Man this game is just like my life, depressing...

the game crashes when i chose to never leave lmao

is this on purpose?

How dare you make me feel feelings!!! >:U

(But in all seriousness I did actually love this game, 5 stars to you!)

I really liked it! I thought the story was great but I guess some flavor text after the last choice would have been nice. Anyway, I really liked it still :) Thanks for making it

Edit: I replayed it and made a lets play of it ^_^ https://www.youtube.com/watch?v=NmdsSxKdssA&feature=youtu.be

I paid a dollar I played 4 min...then it failed.

Hi. The game is supposed to stop after the character creation, it's a kind of joke game. I'm sorry you were disappointed. If it can be of any comfort: I didn't get a single cent from that dollar: every "revenue" from my games is given directly to itch.io. if you didn't like the game, you still can tell yourself you supported an awesome game platform! 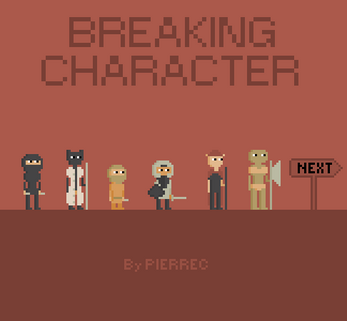